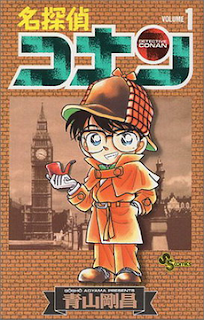 Case Closed, also known as Meitantei Conan (名探偵 コナン?, Detective Conan), is a Japanese detective manga series written and illustrated by Gosho Aoyama and is serialized in Weekly Shōnen Sunday since 1994. The name "Case Closed" for the English language release results from "unspecified legal considerations" of the name Detective Conan.[1] The story follows the adventures of Jimmy Kudo, a prodigious young detective who was inadvertently transformed into a child due to a poison.
Case Closed has been continuously serialized in the Japanese manga anthology Weekly Shōnen Sunday since 1994 and has been collected in sixty-six Tankōbon volumes as of November 2009. Since its publication, Case Closed has spawned a substantial media franchise. The manga has been adapted into an animatedtelevision series produced by TMS Entertainment which is still ongoing in Japan as it adapts the story from the manga. The series has also spawned eleven original video animations, thirteen animated feature films, and many video games.
Viz Media licensed the manga series under the name for English-language publication in North America and released thirty-two volumes as of November 2009. Funimation Entertainment licensed the anime series for North American broadcast. Both the English adaption went under the name Case Closed. Fifty episodes of the English dubbed series aired on Cartoon Network as part of their Adult Swim programming block on May 24, 2004 until January 2005 and were discontinued due to low ratings.[2]
The anime adaptation has been well received, ranking in the top twenty in Animage's polls between 1996 until 2000 where it dropped below the top twenty. In the Japanese TV anime ranking, Case Closed often ranked the top six.